The central-western area of ​​Bucharest rose to second place, concentrating more than a third of transactions.

In the first six months of 2016, the share of office transactions in the Midwest increased to 33% of the total rental market, from only 10%, as it was last year. Thus, it rose to second place in importance in the decision to relocate companies, according to an analysis conducted by ESOP Consulting and CORFAC International.

The number of large office projects in the center-west area exploded between October 2015 and April 2016, attracting the attention of company managers looking for new offices. The Orhideea-Politehnică and Cotroceni subzones were the spearhead. They attracted office transactions totaling 50,209 sqm, only in the first six months of 2016, according to data centralized in the Forum of the leading real estate companies on the office market. This volume represents more than double compared to the value of all transactions in this area at the level of last year (in 2015, in the center-west area, lease agreements of 19,000 sqm were concluded).

“There has been a significant imbalance in the office market in the last five years: the Barbu-Văcărescu-Dimitrie Pompei area has developed rapidly, while the center-west area and the ultra-central areas have had a slower pace, few projects have been started, and they were usually small or medium-sized. Recently, however, we have noticed a growing interest from both developers and companies for the Orhideea – Politehnica area. We believe that this area will be in the spotlight in the next three to four years. The related office stock will partially recover the gap in the center-north area.

In the medium and long term, we consider that a balanced development of three or four office areas in Bucharest can bring as benefits a decrease in car traffic and a more balanced development of areas where residential projects are built, which usually follow office projects. “Says Alexandru Petrescu, Managing Partner at ESOP Consulting | CORFAC International. 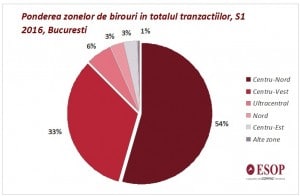 Other significant contracts, made in the first months of 2016 in Bucharest, in the other areas, were those concluded by Telekom, for an office space of 13,000 sqm (a contract renewal in the center-north area), IBM for a space of 10,000 sqm and Vodafone with 4,300 sqm, in the center-south area.

The central-western area attracts customers from the north-central, northern, and ultra-central regions.

In the top of the office space areas in Bucharest, the center-north area leads, with a total of 81,842 sqm and a share of 54% of the total transactions, in the first semester of 2016. From this year, however, the center-north area has serious competition, losing about 14% of the market share only in the last six months (at the level of the whole year 2015, the percentage was 68%).

On the second place in the top in S1 2016 is the center-west area, on the third place the ultra-central area (at a great distance but as a volume of the first two and with a share of 6%), followed by the center-east and center- south, each with a percentage of 3%. In the rest of the areas where transactions were concluded in 2016, southern and western, the total volume barely reached 1%.

Compared to last year, the central-western area increased by 23% of the market share. In comparison, the northern area decreased by 7% and the ultra-central area by 4%. 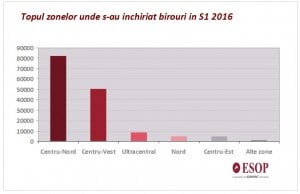 “We believe that in the next period, the central-western and central-northern areas will be at the forefront, and in these areas, the most extensive stock of offices will be delivered, both offering an excellent public transport infrastructure, especially the metro. The central-northern area has as main competitive advantages the proximity of the airport and the residential area for ex-pats, and the central-western area the vicinity of the Regie-Grozaveşti university campus where there is the workforce for IT&C and residential neighborhoods in sectors five and six, for employees “, considers Alexandru Petrescu, from ESOP.