TOP 3 OFFICES IN THE COUNTRY at 9 Months: Bucharest, Cluj-Napoca, and Timisoara 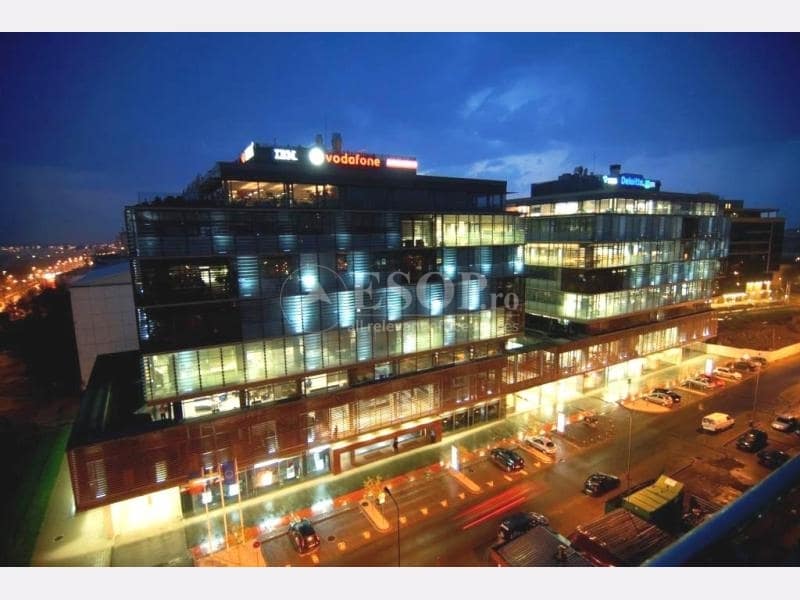 In the first nine months of 2014, transactions were made in major cities in the country, outside Bucharest, with a total area of 25,475 square meters, 79% more than in the same period in 2013 (when 14,153 square meters were rented), according to ESOP figures. The third quarter of 2014 comes with a change on the market for office space transactions, the city of Cluj-Napoca advancing in the top, both in position – in second place after Bucharest, and especially in weight.

In Cluj-Napoca, offices with a cumulative area of 14,990 sq m have been rented since the beginning of the year, given that in Timisoara 5,650 sqm were leased, and in Iasi 4,100 sqm, according to data centralized by ESOP Consulting. If the first two quarters of 2014 Cluj-Napoca had a share of 4% of the total office market, at the end of the third quarter, it reached 7%. 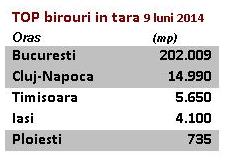 “The trading activity of the office spaces in the big university centers is intensifying on the background of the increased interest coming mainly from IT companies, share-services, call-centers, etc. that want to expand their activities in Romania and are looking for employees educated and talented”, says Alexandru Petrescu, Managing Partner of ESOP Consulting | CORFAC International.

The evolution of the office market in the last 3 months

If at the end of the first two quarters Cluj-Napoca had a share of 4% of the office transaction market in the whole country, a percentage equal to that of Timisoara, at the end of the third quarter it reaches 7% market share and Iasi and Timisoara fall to 2%. The capital remains at an almost equal share of 88%, the variation between the end of Q2 and the end of Q3 being only a few decimals.

Also, the offer of new, high-quality office spaces is higher in Cluj-Napoca.

At the beginning of 2014, we estimate that the stock of high-quality office spaces (class A and B), recently delivered amounts to about 300,000 sqm, cumulated in the three major university centers Cluj -Napoca, Iasi, and Timisoara – where investors and -the forces were concentrated, according to ESOP Consulting data.

A large part of them was rented in the project phase. The vacancy rate in Timisoara and Cluj-Napoca was below 7%, half of that in the Capital. Half of these modern office spaces delivered or still in operation are in Cluj-Napoca. The deliveries of office space in 2014 estimated by ESOP Consulting, for the three large university centers – Cluj-Napoca, Timisoara, and Iasi are located at a total area of about 70,000 sqm. 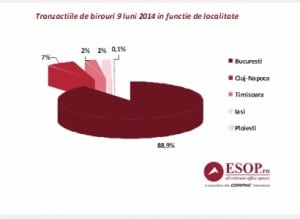 “The accelerated growth rate of the office market in Cluj-Napoca shows us that the vision that entrepreneurs and local authorities have to transform this city into a Silicon Valley of Romania is beginning to bear fruit, more and more companies are choosing to open offices here, and we estimate that the pace of development will keep you in the next three years “, says Alexandru Petrescu, Managing Partner ESOP Consulting | CORFAC International.