Office transactions for areas between 1,000 and 3,000 sqm have the largest market share 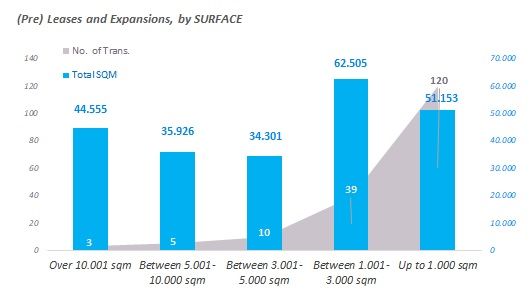 n the first three months of 2018, about half of the new lease transactions, pre-lease and space extensions covered areas ranging from 1,000 to 3,000 sqm, according to an ESOP Consulting ǀ CORFAC International company estimate. This segment is growing due to new tenants who go for medium-sized office spaces.

The same as last year, office transactions between 1,000-3,000 sqm had the highest share in new lease, pre-lease and expansion, 27 %, followed by transactions for office areas under 1.000 sqm, 22%, and the segment of transactions for over 10.000 sqm, according to a market research by ESOP Consulting | CORFAC International.

“Office requests for areas ranging from 1,000 to 3,000 sqm came from medium-sized companies with employees between 80 and 300 in Romania, as well as large companies with thousands of employees opening several branches in major cities of the country (such as Accenture or Endava companies), but also from companies that offer personal services to corporate employees (such as World Class Romania).

As a trend, in the last year it is noted that the demand for this segment exceeds to 70% for big office projects, class A and B, under construction or recently delivered.

At the end of last year and earlier this year, World Class pre-leased three spaces with areas between 1,000 and 3,000 sqm, through ESOP, in major office buildings under construction, at AFI Tech Park and Expo Business Park in Bucharest and a space in Record Park, an A Class office building in Cluj-Napoca.

In 2005, 13 years ago, when the first modern office buildings in Bucharest were delivered, 73% of office space requests were for areas up to 1,000 sqm and only 27% from companies requesting spaces larger than 1,000 sqm, according to a market study from that date, also made by ESOP.

Large area office applications have increased year by year, and as of 2017 market segments took a turnover: 22% of office rental transactions were made for spaces under 1,000 sqm and 78 % transactions for spaces over 1,000 sqm, according to the latest market research from ESOP Consulting | CORFAC International.