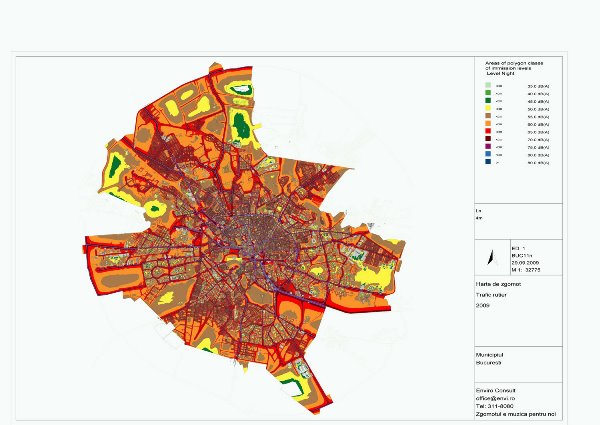 In Romania, Directive 2002/49 / EC on the assessment and management of environmental noise has already entered into force. The steps towards the European Union bring Romania the obligation to draw up noise pollution maps. Their impact in the medium and long term will be to raise the population’s quality of life. Still, implicitly there will be changes in many areas, from real estate to the production of appliances and vehicles.

The first stage / which will be put into practice starting with this year/targets the localities in the urban area with over 250,000 inhabitants. Later, beginning with 2011, such maps will be made for all agglomerations. Romania, like all the member countries of the Union, will be obliged to display the acoustic maps in public places, on electronic panels, on the Internet, and in the media.

After their completion, the maps will be updated every 5 years. The first cities monitored are Bucharest, Iasi, Cluj-Napoca, Timisoara, Constanta, Craiova, Galati, Brasov, Ploiesti Municipality, and the communes of Valea Calugareasca, Barcanesti, and Blejoi. Acoustic maps will also be made for the main roads with a traffic of more than 6,000,000 vehicles per year. These roads are DN1 (Bucharest-Ploiesti), DN2 (Bucharest-Buzau); DN5 (Bucharest Giurgiu); DN6 (Bucharest-Alexandria); DN7 (Bucharest-Pitesti); A1 (Bucharest-Pitesti).

Environmental noise is a severe and growing problem, and internationally, it has been realized that it is one of the factors that negatively influence people’s health in the 21st century. Experts from the World Health Organization (WHO) show that at least 20% of Europe’s population suffers from noise.

Conditions such as insomnia, hearing loss, cardiovascular disease, and even speech difficulties are the result of noise pollution. The first effects of noise are felt at the mental level. They are: -distraction of attention -reduction of performance in tasks that use short-term memory -vegetative dysfunction (increased cardiac activity) -hearing -difficulties in coordinating movements.

“It is possible that these assessments will affect the housing market, changing the perception of certain areas. In the first stage, the upper segment of the market will be affected, namely luxury homes “, says Oana Butescu, Senior Residential Broker within the real estate agency ESOP.

“In this segment, the demand comes from ex-pats, people with higher needs, and accustomed to specific standards in the countries they come from. Romanian citizens, especially people with average incomes, will give less importance to noise pollution. Still, it is possible that in the long run, this perception will change “, added the ESOP representative. Currently, the maximum noise level allowed for living spaces is 50 decibels (although for the night it is desirable to be up to 30 decibels). In significant intersections and urban agglomerations, the noise level reaches 80, even 100 decibels.

For a better understanding of the noise level, Drd. Eng. Catalin Raclariu from ITM Vaslui makes in his study Noise and its consequences on society a table with the relative level of different sounds. For example, the level of a discreet conversation is between 20-50 decibels, that of a busy street between 65-70 decibels, and that of thunder between 90-100 decibels.

“The introduction of acoustic maps will essentially bring a better quality of life, and is also a measure of informing and educating the population about the effects of noise exposure,” concluded Oana Butescu from ESOP. It will also facilitate traffic redirection to achieve uniform distribution, the development of new residential areas, and the establishment of recreation areas taking into account the noise level, including the use of green spaces as buffer zones to reduce noise pollution.