The Office Market at the beginning of 2016 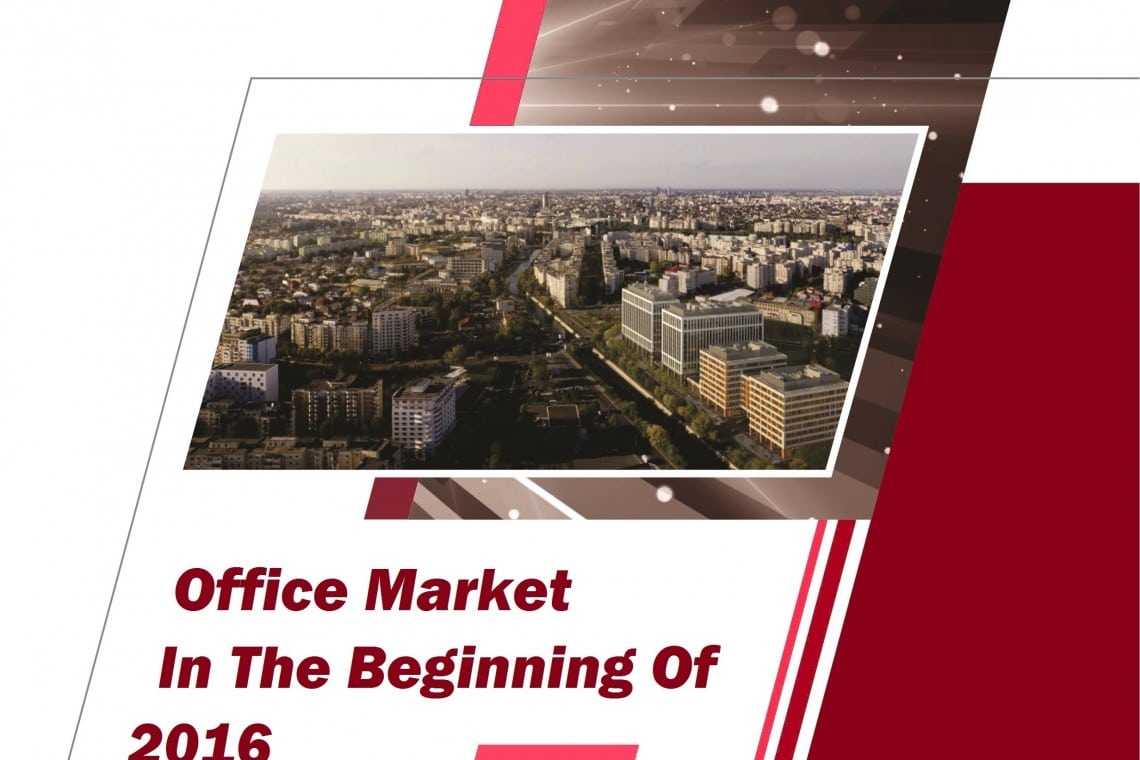 For the next two years, we estimate a greater dynamics of transactions on the office market, in the context of deliveries of new spaces at historical quotas, of approx. 400,000 in 2016, respectively 250,000 sqm in 2017. The high quality of these projects, as well as their more balanced distribution in the sub-markets in Bucharest, will be favorable premises for relocation decisions for many companies. 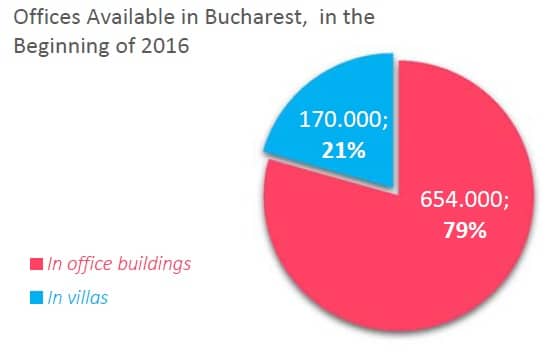 Offices available for rent in the capital, in business centers, mounted at the beginning of 2016 to approx. 654.000sqm, stock decreased by approx. 25% compared to the previous year, a situation favored by the delay of some projects under construction for 2016. 49% of the office buildings in Bucharest have spaces available for rent (ie in 512 buildings of the total amount of 1.056 class A, B or C buildings).
Most part of the office space stock (56%) is concentrated on segments of rent below 11Eu/sqm, while only 23% and 20% is the stock of spaces with a budget between 11.1 ‐ 14Eu/sqm and of the ones with a budget of more than 14.1Eu/sqm.
In terms of geographic location, the north-central area remains in 2016 the area with the richest offer, ie 187.000sqm, almost a third of the total stock.
Note: We consider that the north ‐ central area includes Victoriei Square–Domenii – Aviatiei – Barbu Vacarescu‐Pompei. 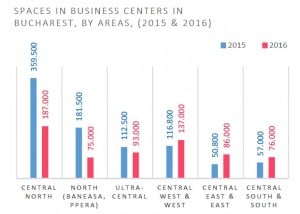 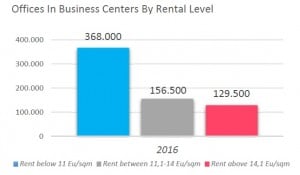 In 2015 were actually delivered approx. 85.000sqm, 2015 being the year with the lowest amount of spaces delivered
during the last 10 years. This was largely due to the delay of four projects for 2016, amounting to over 90.000 sqm.
The total stock of spaces in office buildings in Bucharest amounts up to 2,88 mil. sqm. at the end of 2015, of which 1,9 million is represented by quality spaces (class A or B+ buildings). 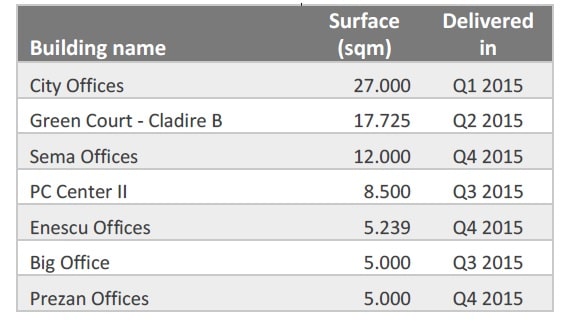 For 2016, a record volume of office spaces is expected to be delivered, approx. 395.000sqm, a volume similar to the one registered in 2009 (the year with the highest deliveries registered in the Romanian office market history). This year will mark a premiere, namely the fact that most parts of the buildings to be delivered are projects with multiple stages, having extended sizes.
Approx. 25% of the spaces to be delivered are already pre-rented. Like in previous years, it is possible that some of these spaces be delayed for 2017, or be stopped at a certain level of finishing, waiting for clients to pre‐lease some areas.
The total volume of projects announced for 2016‐2017 is estimated to approx. 650.000 sqm.
The central north area will continue to remain the perimeter with the largest deliveries – with 65% from the total surface, and a number of 21 projects. The central‐west area re‐enters on developers’ agenda, after a 7 years period registering only a limited number of projects. In 2016‐2017, approx.. 26% of the office deliveries will be registered in this sub‐market, within 6 representative projects: AFI 4&5, Orhideea Tower, The Bridge (A), Plaza Romania partial office reconversion, Anchor Metropol, Sema Offices II. 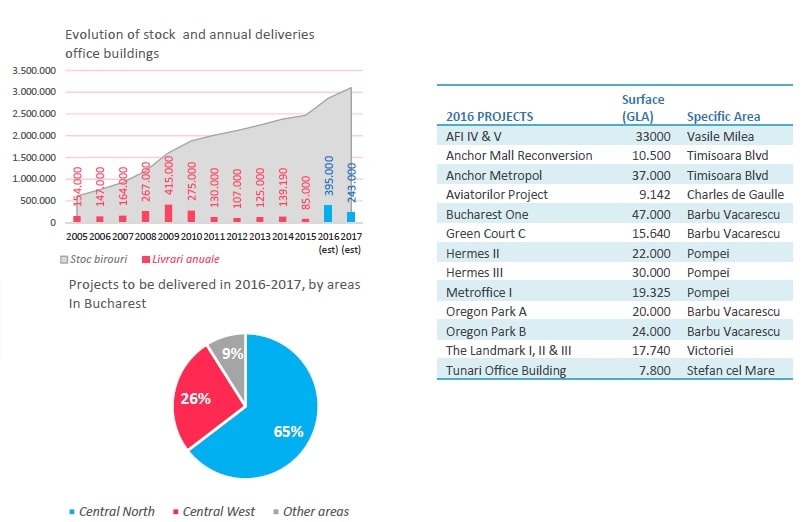 The stock of office spaces available in villas amounted at the beginning of 2016 approx. 170.000sqm, 16% higher compared to the previous year.
If during the economic recession the demand for spaces in villas has steadily grown (often characterized by a decrease in the stock of spaces available on the market), during the current period of economic recovery it has registered a decrease in the demand level for offices in villas, the tenants preferences shifting towards the spaces in office buildings. 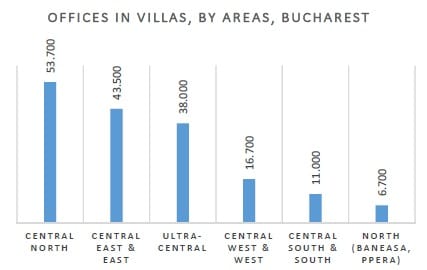 The volume of office spaces leased in Bucharest in 2015 was of approx. 260.000sqm, 15% lower compared to 2014 and 7% lower than the average leased surfaces during the last 3 years.
The main cities in the country yet managed to maintain a growth rate in 2015, with 54.000sqm leased and pre‐leased, increased by 46% compared to the previous year. It is continued therefore the dynamic trend marked in 2014 by the cities outside Bucharest when a 61% increase was registered. The cities with the largest leasing level in have been Iasi, with 38% of the transaction carried outside Bucharest (22.500sqm) and Timisoara – with 24% (12.800sqm), the rest of the transactions being registered in Brasov, Cluj Napoca, Oradea, Bacau and Craiova.
The main factor of this dynamics remains the human resource, companies interest for easy access to the qualified workforce.

In 2015, the pre‐leasing transactions registered a 32% decrease. However, it is possible that part of the transactions
initiated in this period to be successfully closed in the first semester of 2016.

LEASES AND PRE‐LEASES, BY AREAS, BUCHAREST

73% of the total lease and pre‐lease transactions performed in central‐north. The lowest transaction levels registered in the east and south areas, which are significantly less developed in the office segment in Bucharest. The northern (Baneasa, Pipera), ultra‐central and western areas registered a percentage between 6‐12%.
For the following years, we estimate a slight re‐balancing of the office development by areas, and of the transitioning level implicitly, due to the delivery of some large size projects in the central‐western area.

LEASES AND PRE‐LEASES, BY TYPES OF AREAS

LEASES AND PRE‐LEASES, BY FIELDS OF ACTIVITY

The engine of the office market continues to be the IT & C segment, with a 47% share of total lease and pre‐lease transactions. The next two important segments were FMCG and Professional Services, with percentages of 13%, and 11% respectively. 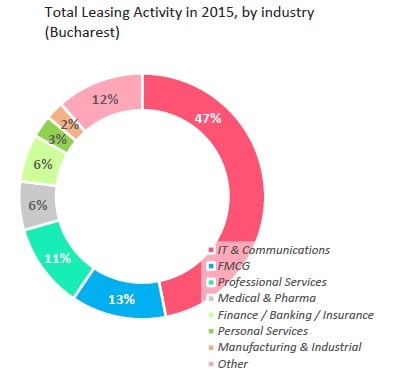 In the central‐north, ultra‐central and central‐west areas, rents are stable at the beginning of 2016 with relatively few fluctuations recorded during the last 12 months. More exposed to rent variations are the northern areas of Baneasa and Pipera or the peripheral ones, that constantly registered in the last 3‐5 years the highest vacancy rate (between 25 and 38%).
It is still preserved the policy of providing incentives by the owners like contributions to tenant’s fit‐out (partially or sometimes entirely), and/or rent-free months. Such incentives are important in terms of net effective rent levels, and therefore they significantly influent the relocation decision.

On the segment of class A spaces, the service charge level promoted by the owners is between 3,2 – 4,0Eu/sqm, while for class B or C spaces their level may reach values lower by 30‐45 %.
The consumptions of utilities are not included in the aforementioned amounts and can reach an average additional amount ranging between 0,6‐1,2Eu/sqm, depending on the building.

The contractual period varies depending on the type of property, from firmly 5 years (in case of class A buildings recently built), up to 2‐3 contractual years (for other types of buildings). 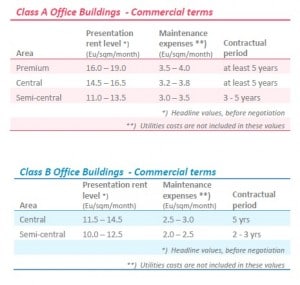 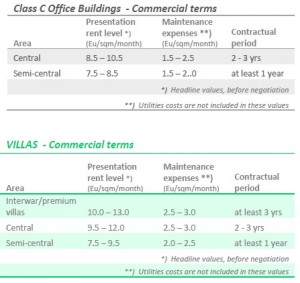 For the following 2 years, we estimate a more dynamic office market, in the context of a pipeline volume at a historically high level, namely approx. 395.000sqm in 2016, and over 250.000sqm in 2017. The high quality of these projects and their more balanced distribution in the city will be important reasons for favorable relocation decisions for many companies.

But the office market is developing in close connection with external factors such as the evolution of the domestic and global economic environment, or access to the qualified labor force. Such factors can decrease the absorption rate, despite its relatively high volume of new spaces to be delivered.

For the owners of office spaces, especially for those who own buildings built in the past, and that will reach the third or fourth generation of tenants, the investments for renovation and modernization of the spaces will be particularly welcome, even necessary in certain situations, to face the increased competition and new quality standards that are formed on the market. Such renovations should target both the aesthetic side of the building ‐ access areas, reception, common spaces, and certain important systems of the building ‐ such as heating and air conditioning, ventilation, envelopment system of the building, etc. Also, in the long run, some buildings will have to rethink their functionality and purpose, as the real estate market will get more and more competitive in terms of office products.
In terms of the legal framework, two new important regulations issued at the end of 2015 will generate effects on the office market as well. We refer to (i) the limits imposed for certain businesses to operate in buildings with earthquake risks and (ii) the increase of tax on the properties applicable to the residential properties used in commercial purposes. In the following 1‐2 years, the offices functioning in residential buildings will lose the attractiveness for the office market, and we estimate they will be retunning the residential segment, for rent or for sale. The start‐up companies will prefer in many cases the co‐working/instant office solutions. These types of spaces gained field in the last years in Bucharest and we expect soon to expand in the country, due to the large scale development of freelancing and outsourcing fields, of work based on creativity and results, to the detriment of traditional forms of employment.

Also, as a result of the “Colectiv” bar fire, the companies seeking office spaces will grant special attention to buildings complying properly the fire protection regulations.

From a medium and long term perspective, the regulations initiated in 2015 will probably mark the office market transition in Bucharest, marking the descent of the improvised office solutions, and the shift to professionally developed office buildings. 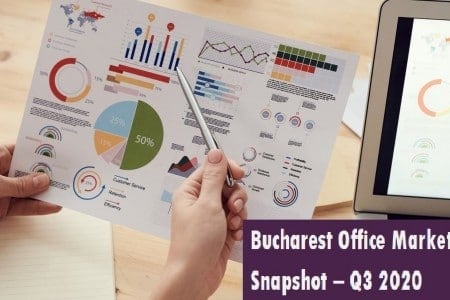 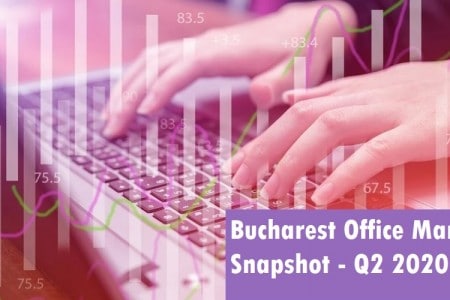 
Overview In the first quarter of 2020, four new office projects were completed In Bucharest, with a total GLA of 76,000 sqm, of which around 57% is already pre-rented. Download the Bucharest Office Market Snapshot in Q1 2020 Occupier focus In Q1 2020, the demand for modern office space in Bucharest was of 51,400 sqm. […]